Virat Kohli and Anushka Sharma are awaiting the birth of their first child.© Instagram


Virat Kohli, India captain across all formats, took to Instagram on Wednesday to react to her wife Anushka Sharma’s Instagram post where the Bollywood actor can be seen flaunting her baby bump in a shoot for a magazine. “Beautiful,” Virat Kohli left a comment on Anushka’s post along with a heart emoji.  Virat Kohli flew back to India from Australia after the first Test Down Under which the visitors lost by eight wickets after a dramatic batting collapse on Day 3 at the Adelaide Oval. 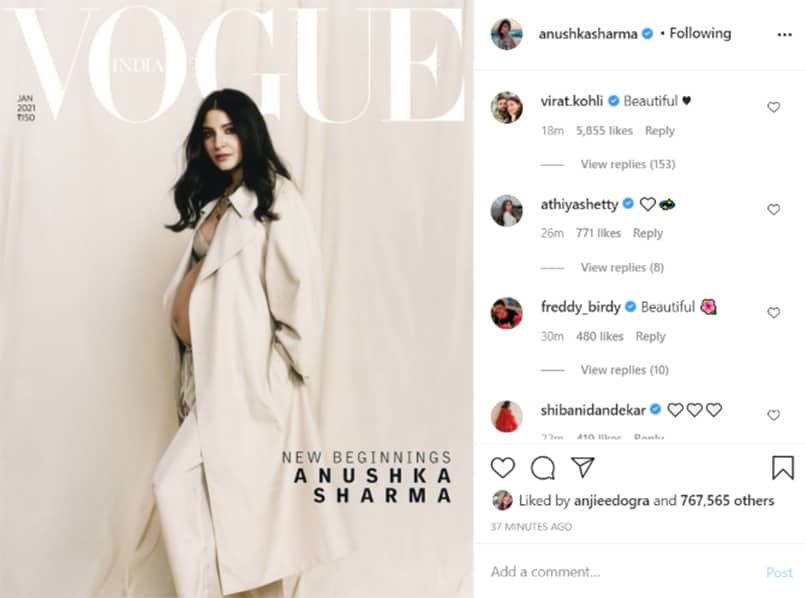 Kohli and Anushka are awaiting the birth of their first child and the Indian skipper was granted a paternity leave by the Board of Control for Cricket in India (BCCI).

During the ODI series, Virat Kohli broke Sachin Tendulkar’s long-standing record and became the fastest player to reach 12,000 runs in the 50-over format.

While the India captain ended the year without hitting a century in any format, Kohli bagged two top honours at the ICC awards of the decade.

After taking home the top honours, Kohli mentioned that the awards are a recognition of the amount of hard work he has put in over the last 10 years.

Kohli was also named in ICC’s teams of the decade across all the three formats, while the international cricket body named him as captain of the Test XI of the decade.

Motorola Could Be Working on New Flagship, Leaked Renders Show