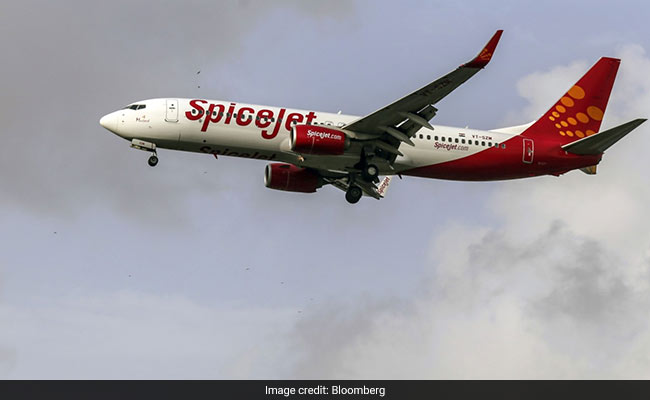 SpiceJet Ltd. sees “no possibility at all” of failing, a spokesman said

The global airline industry has never had it so bad. Not even after the 9/11 terrorist attacks.
Airlines could lose a quarter of a trillion dollars in revenue this year, according to the International Air Transport Association, as travel comes to a standstill with countries locked down to fight the coronavirus. Most carriers will go bankrupt by the end of May if they can’t find support, Sydney-based CAPA Centre for Aviation said last week.

“In this very difficult period, it will only be the survival of the fittest” – Qatar Airways CEO Akbar Al Baker 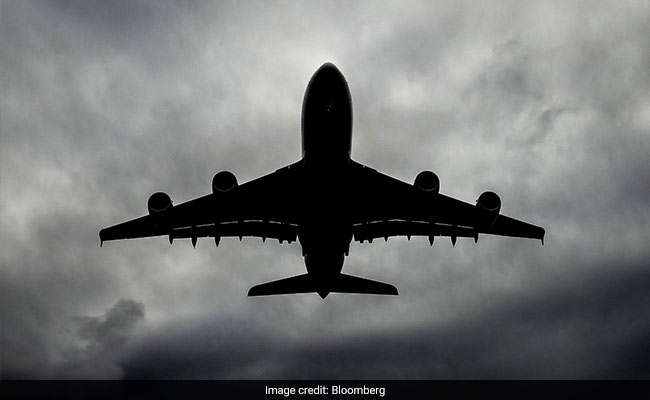 Which airlines are most at risk? Like the virus, the crisis is indiscriminate, affecting everyone from budget operators to national flag carriers. Aircraft manufacturers and their suppliers also are under immense pressure, with Boeing Co. calling for billions of dollars in state support and Airbus SE extending credit lines and canceling its dividend.

Using the Z-score method developed by Edward Altman in the 1960s to predict bankruptcies, Bloomberg News filtered out listed commercial airlines to identify the ones most at risk of going bust, based on available data. The calculations don’t take into account government bailouts or other funding sources that could help keep operators alive. 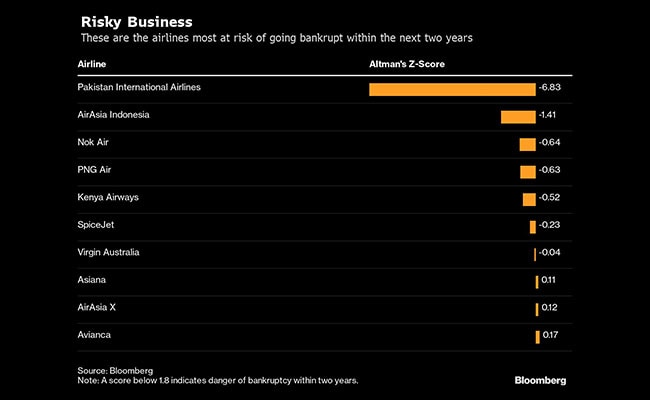 While the list is concentrated in Asia, mostly due to high debt levels, European carriers aren’t immune, as the collapse of UK regional airline Flybe Group Plc proved. According to Altman, scores of 1.8 or below indicate a risk of bankruptcy and scores over 3 suggest sound footing. Indebted low-cost carrier Norwegian Air Shuttle ASA and Air France-KLM both landed below the threshold, as did American Airlines Group Inc. and SkyWest Inc.

Governments around the world are in talks with aviation companies about financial support, and those with deep-pocketed backers — such as Delta Air Lines Inc. with billionaire investor Warren Buffett — will have access to other avenues for cash.

“People that were bragging about not taking state aid and being independent are now themselves all over the world asking for state aid,” he said Thursday on Bloomberg Television.

The Z-score involves five variables measuring liquidity, solvency, profitability, leverage and recent performance. The model initially had accuracy rates of over 95 per cent in predicting bankruptcies, but has come down to between 80 per cent and 90 per cent based on a year before insolvency, Altman said in a 2018 interview.

A spokesman for Pakistan International Airlines Corp. said losses and debt have become too much for the company to handle alone and that options suggested to the government include a debt-to-equity swap and long-term bond issue. A representative for AirAsia Group Bhd declined to comment, while PNG Air Ltd. didn’t respond to a request for comments. The communications director for Kenya Airways Plc, which is now operating only a handful of local flights, couldn’t immediately comment.

SpiceJet Ltd. sees “no possibility at all” of failing, has maintained adequate cash flows and expects a surge in demand as the virus is contained, a spokesman said. Virgin Australia Holdings Ltd., which has furloughed 80 per cent of its workforce and slashed flights to a bare minimum, said it is taking measures to rapidly reduce its cost base to preserve cash.

Asiana Airlines Inc. said it secured a bridge loan and will receive 1.6 trillion won ($1.3 billion) from Korea Development Bank and other creditors. It also said financials will improve once HDC Hyundai Development Co. and its partners complete their acquisition of Kumho Industrial Co.’s stake. Also, the Korean government will meet Friday to discuss the airline industry and measures to provide emergency funds to large companies, Yonhap News reported Thursday. 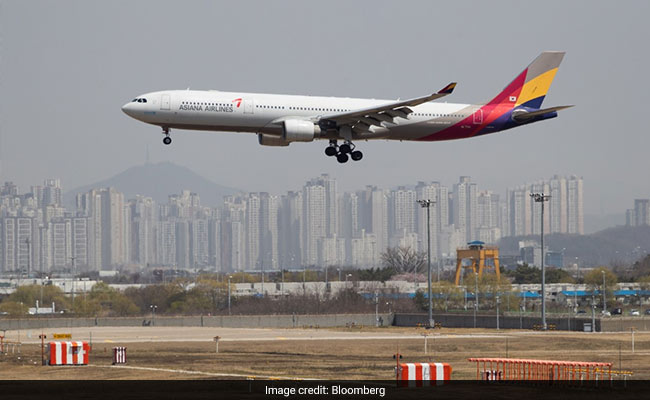 An Asiana Airlines A330 prepares to land at Incheon International Airport in South Korea.

Avianca Holdings SA didn’t respond to requests for comment. The Bogota-based company has offered its 21,000 employees unpaid leave and is negotiating payment terms with suppliers.

Norwegian Air is trying to secure a government lifeline worth up to $270 million under certain conditions, and this week two Nordic banks were approved to provide a guarantee for the required 10% for the first tranche. The airline declined to comment further.

A spokeswoman for Air France-KLM declined to comment. The airline counts the French and Dutch governments as its biggest shareholders, and both governments have signaled they will provide support if needed.

American and SkyWest declined to comment. US passenger carriers are poised to receive up to $25 billion in payroll support funds and cargo haulers $4 billion — earmarked for items like salaries, benefits and healthcare — with a like amount of loans.

Much hinges on an airline’s ability to use cash in hand or access more money. Some in Asia, including Korean Air, Asiana, China Southern Airlines Co. and China Eastern Airlines Corp. have reserves to last only weeks, according to Bloomberg Intelligence. IndiGo, operated by InterGlobe Aviation Ltd., has enough to last about a year even if its fleet remains grounded (and staff costs drop only 30 per cent), BI analysts including James Teo wrote in a note Wednesday. 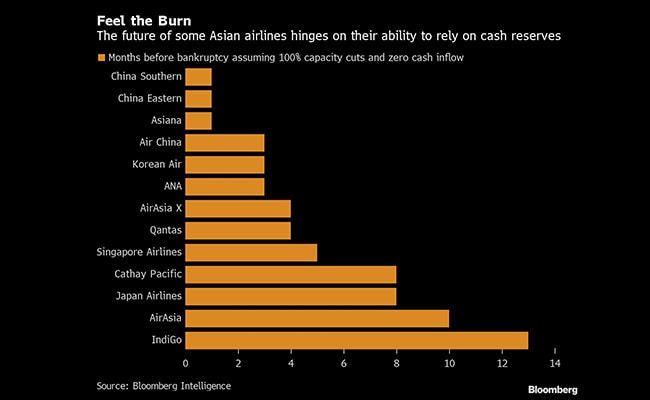 Different methods of estimating airline viability give out varying results, and not all airlines that are short of cash are going to go bust.

Singapore Airlines Ltd. unveiled a plan to initially raise about S$8.8 billion ($6.2 billion) to contend with the impact of the virus, with state investor Temasek Holdings Pte., the carrier’s biggest shareholder, saying it would back the resolutions. The carrier’s shares fell as much as 10 per cent Friday following the announcement, before paring the loss to 3.2 per cent at 11:50 a.m. local time.

A Korean Air spokeswoman said the company is about to raise funds through asset-backed securities, reflecting market confidence in the carrier. “We also expect the government to provide support measures,” she said, adding that the airline plans to generate more revenue by increasing cargo operations.

Japan Airlines Co. issued bonds earlier than originally planned based on the trend in interest rates, according to a spokesman, who said details on the company’s financials will be revealed in its next earnings. All Nippon Airways Co. declined to comment, saying the health and safety of its passengers and employees was its priority.

Airlines could sell assets including planes to raise cash. Without taking that step, assuming revenue from ticket bookings is kept, some may still last more than a year, according to analysts at Credit Suisse Group AG. While the liquidity situation is fluid and doesn’t take into account potential bailouts, this list gives a sense of which airlines are best-positioned if travel is suspended for longer. 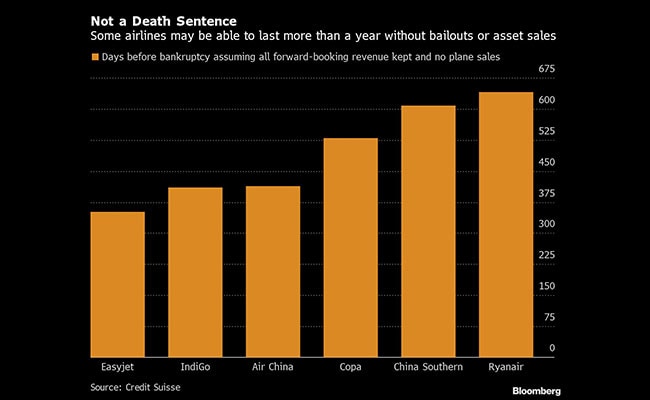 Ryanair Holdings Plc said it had cash and equivalents of over 4 billion euros as of March 12, undrawn credit lines and nearly 300 owned aircraft valued at about $8 billion to $10 billion. It declined further comment.

Panama’s Copa Holdings SA grounded its fleet as of Monday. It said earlier in the month that the impact on its finances depended on the extent of the pandemic and related travel hit. A spokesman declined to comment further. 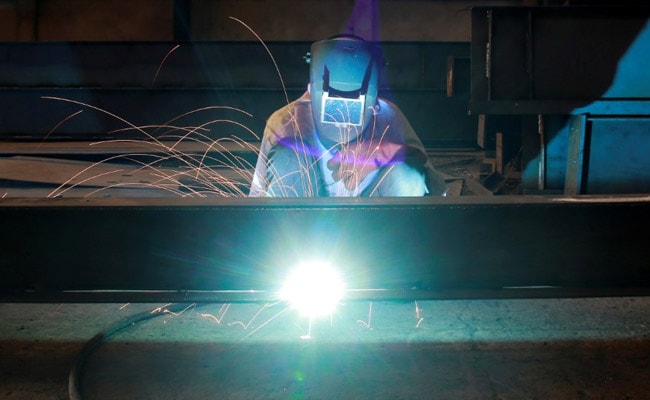