Domestic stock markets rose 1.5 per cent on Friday, registering a fifth straight week of rise. For the latest trading week, the Sensex gained 425.81 points (1.16 per cent) to 37,020.14 – its strongest closing level recorded since March 6, and the Nifty added 133.65 points (1.24 per cent) to settle at 10,901.70. A largely positive beginning of the corporate earnings season along with gains in global markets boosted the domestic equities, shifting investors’ focus from rising COVID-19 cases in India and abroad, say analysts.

IT was the best sector on the NSE. The Nifty IT index – comprising 10 technology stocks including the country’s three largest companies by market value, TCS, Infosys and HCL Tech, skyrocketed more than 10 per cent for the week. The pharmaceutical and metal gauges followed with gains of around 5 per cent each. 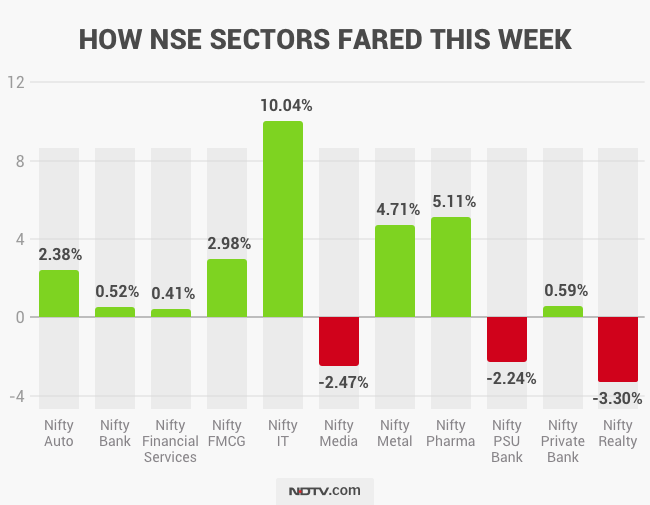 Corporate earnings among blue-chip companies have so far been positive with IT majors Infosys, Wipro and HCL Technologies beating estimates and only Tata Consultancy Services missing.

HCL reported a better-than-expected profit for the first quarter and guided to a 1.5-2.5 per cent quarter-over-quarter increase in revenue for the next three quarters, boosting its shares.

Coronavirus cases in India – the world’s second-most populous nation – crossed 1 million as of Friday morning, and the number of deaths rose above 25,000, according to government data.

In the Nifty basket of 50 shares, Infosys, Wipro and Bharat Petroleum jumped the most among the 29 percentage gainers for the week. On the other hanid, Adani Ports and Bharti Infratel were the biggest losers. Analysts awaited more large cap companies to report their financial results for the April-June period.

“With the Nifty 50 breaking the crucial resistance zone, a sign of new bullishness has emerged in the markets. Encouraging earnings commentary from index heavyweights also cheered the traders for bargain hunting at the recent correction,” said Rahul Sharma, market strategist and research head at Mumbai-based Equity99 Advisors, an investment advisory firm.

“In the coming week, markets will continue to remain volatile as traders start rolling their positions in the derivative segment. Corporate earnings and global market clues will set the direction for traders. We expect the Nifty 50 to cross 11,000,” added Mr Sharma.