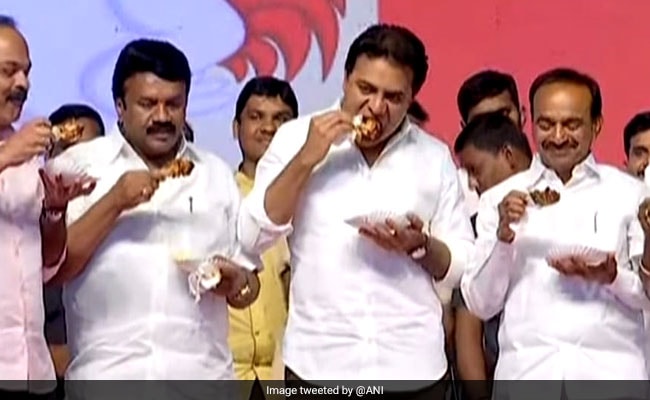 A long line of ministers are seen eating succulent pieces of chicken on stage in Hyderabad. The ministers, all in white shirts, are seen holding chicken legs in one hand and paper plates on the other.

The event was organised to dispel fears that coronavirus is spread by eating chicken and egg.

On the stage, Telangana minister KT Rama Rao is seen taking a quick bite. His colleagues Etela Rajender, Talasani Srinivas Yadav and others are also seen digging in.

The novel coronavirus, which infects the respiratory system, was first reported from a seafood market in China’s Wuhan, sparking rumours that it could have mutated from an animal to infect humans. Researchers are still trying to pinpoint the exact source.

The coronavirus has spread to several countries, the latest being US, where health officials today reported a third case transmitted to a person who did not travel overseas or come in contact with anyone known to be ill, indicating the disease was spreading in the country.

Three people in India are confirmed to have got the virus. Groups of Indians who came from China are under quarantine, while some of them have been released after staying under observation for weeks.

The World Health Organisation on Friday raised its global risk assessment of the new coronavirus to its highest level after the epidemic spread to sub-Saharan Africa and financial markets slumped.

The virus has proliferated around the globe over the past week, emerging on every continent except Antarctica, prompting many governments and businesses to try to stop people from travelling or gathering in crowded places.