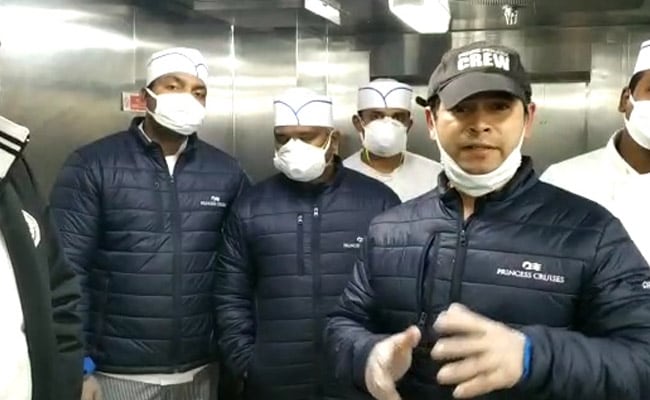 Panic has struck the crew and passengers of the luxury cruiseliner that has been quarantined off a port in Japan since February 5. An Indian crew member on-board Diamond Princess told NDTV that the captain of the ship announced today that 66 people have been tested positive for the new coronavirus.

He is one of the 160 Indian crew members on the ship. More than 3,700 passengers and crew are facing a two-week quarantine.

Binay Kumar Sarkar, a chef from north Bengal who had earlier gone on social media to appeal to the Indian government for help, told NDTV that there was full-fledged panic on-board.

In a video recorded from the ship, Mr Sarkar appealed to the government and the United Nations to segregate the Indians on board. “None of them have been checked (for coronavirus),” he said in Hindi, indicating five of his Indians colleagues. All the men in the video were wearing white masks.

“Please somehow save us as soon as possible. What’s the point if something happens (to us)…I want to tell the government of India, Modi-ji, please segregate us and bring us back home safely,” he said.
Diamond Princess had sailed from Japan’s Yokohama on January 20. At Hong Kong, a passenger got off on January 25. On February 2, the ship received word that the Hong Kong passenger was found positive for coronavirus.

There were more than 3,700 passengers and crew on the ship when it arrived off Japan’s coast on last Monday. It docked in Yokohama on Thursday to resupply for a quarantine that could last until February 19. Only a fraction of the people on the ship, 356, have been tested if they have been infected.

According to several Japanese news sources, the number of new positive cases confirmed today is 60. The total number of coronavirus-positive people on board is 130.

Passengers on the ship have been asked to stay inside their cabins to prevent new infections and expressed confusion and frustration. The World Health Organization (WHO) called on Tokyo to provide sufficient support, including mental care, for the passengers and patients.

The crew members sending the SOS message also pointed out that all passengers of another cruiseliner called World Dream, which was quarantined around the same time as Diamond Princess, were allowed to leave their ship on Sunday.

The coronavirus has  infected more than 40,000 people in multiple countries and killed over 900, mostly in mainland China.