Kim Kardashian West on Wednesday opened up about her husband Kanye West’s bipolar disorder, calling on the media and public to show “compassion and empathy” in light of the rapper’s recent erratic behavior. West launched his presidential campaign Sunday in a rambling speech where he made bizarre comments about abolitionist Harriet Tubman, revealed he had wanted to abort his now seven-year-old daughter, and broke down in tears.

He featured in headlines in recent days for his tweets, later deleted, that accused his wife and mother-in-law of trying to lock him up, and suggested he is seeking a divorce.

Reality TV star Kardashian West wrote in lengthy Instagram stories that she had been reluctant to speak publicly about how her husband’s illness had affected his family “because I am very protective of our children and Kanye’s right to privacy.

“But today, I feel like I should comment on it because of the stigma and misconceptions about mental health,” said the 39-year-old.

Kardashian West said in her post: “Those that understand mental illness or even compulsive behaviour know that the family is powerless unless the member is a minor.”

“People who are unaware or far removed from this experience can be judgmental and not understand that the individual themselves have to engage in the process of getting help no matter how hard family and friends try.”

She said she understood that, as a public figure, West’s words were subject to criticism and could evoke “strong opinions and emotions.”

But she added that he is a “brilliant and complicated person who on top of being an artist and a black man, who experienced the painful loss of his mother … has to deal with the pressure and isolation that is heightened by his bi-polar disorder.

“Those who are close with Kanye know his heart and understand his words sometimes do not align with his intentions.”

She closed out her statement by saying that living with bipolar disorder did not invalidate her husband’s dreams or ambitions, “and as we have all witnessed, many of his big dreams have come true.” 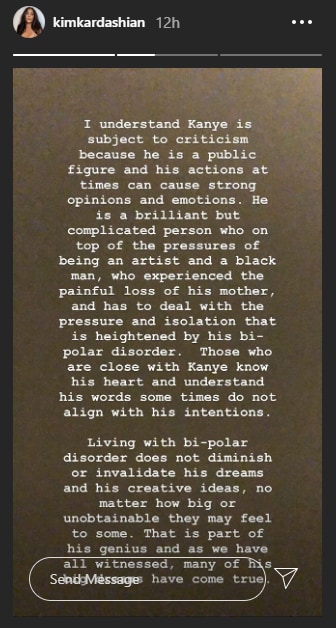 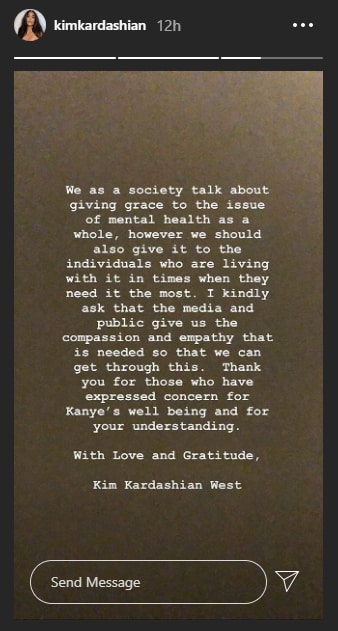 West, one of the world’s best-selling artists, announced he was running for president on July 4.

“We as a society talk about giving grace to the issue of mental health as a whole, however we should also give it to the individuals who are living with it,” said Kardashian West.

“I kindly ask that the media and public give us the compassion and empathy that is needed so that we can get through this,” she concluded.

West, 43, first revealed his diagnosis on his 2018 album Ye where he called it his “superpower.”

No Change In Petrol, Diesel Prices Across Metros On Thursday

Amazon Disables Its Original iOS App in India, Points Users to New One