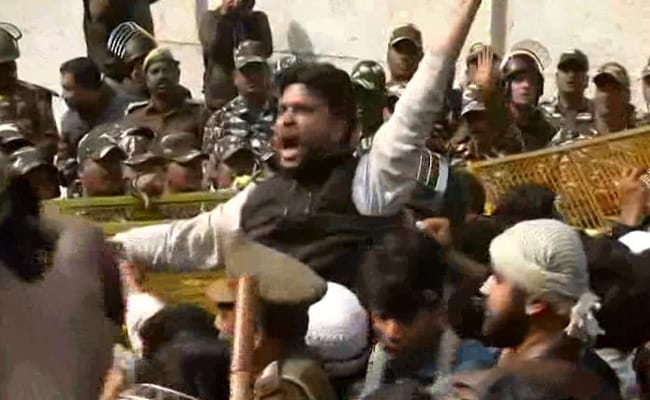 Protesters from Jamia were stopped from marching to parliament by the police.

Hundreds of people protesting against the Citizenship Amendment Act got into a scuffle with the police in Delhi this afternoon after they were stopped from marching towards the Parliament House.

Shouting “Kagaz nahin dikhayenge (we won’t show any documents)” the protesters – including students from the Jamia Millia Islamia, alumni and the locals from the surrounding areas – had started the march from the university.

But soon after, they were stopped by the police, who said they did not have any permission to march to parliament. The scuffle broke out at the last barricade when the protesters insisted on moving forward.

Visuals from the area showed some trying to jump over barricades as police in riot gear tried to stop them.

The clash came as the Supreme Court issued notices to the Centre and the Delhi government over the two-month-long protest at Shaheen Bang, which has come to be known as the epicentre of the agitation against the controversial law.

The court took note as a 12-year-old National Bravery Award Winner wrote to Chief Justice Bobde over the recent death of a four-month-old baby, whose mother had been taking him to the protest ground in the freezing cold. “No protest can be held in a common area for so long,” the court said.

Along with Shaheen Bagh, the Jamia university has also been witnessing protests since the citizenship law was passed in December.

The CAA provides for citizenship for non-Muslim minorities from Muslim-majority countries like Pakistan, Bangladesh and Afghanistan if they fled religious persecution and entered India before 2015. Critics believe the law, along with the NRC, will be used to target Muslims.