All passenger trains have been cancelled through March 31

India will suspend all domestic flights from midnight Tuesday, the final piece of a nationwide lockdown that threatens Prime Minister Narendra Modi’s attempts to revive an economy already expanding at the slowest pace in more than a decade.

The flight ban compliments a cancellation of all passenger trains through March 31, as authorities try to halt the spread of the coronavirus in the world’s second-most populous country, which has poorly equipped hospitals and inadequate social security. PM Modi on Monday held a conference call with some of India’s top entrepreneurs and bankers, who urged policy makers to immediately slash interest rates by as much as a full percentage point, transfer cash to the poorest citizens, and suspend loan-repayments.

Over the past three days, state after state has declared curfews and India’s international borders have been shut for most visitors since March 11. India so far has 467 virus cases, including seven deaths. But experts say the country could be on the same trajectory as Italy, where the outbreak quickly escalated, causing hospitals to overflow.

“This is the biggest lockdown in world history,” said Raghu Raman, a former soldier with the Indian army and founder of the National Intelligence Grid, an umbrella database aimed at countering terrorism. “This strategic pause gives decision makers more time to arrest the exponential spread of the virus and evaluate trade offs.”

Controlling the outbreak is crucial for PM Modi, who remains India’s most popular political leader currently though his economic management has faced criticism. Foreign investors are selling Indian assets at an unprecedented pace and failure to contain deaths and infections could erode some of the prime minister’s personal appeal at home. 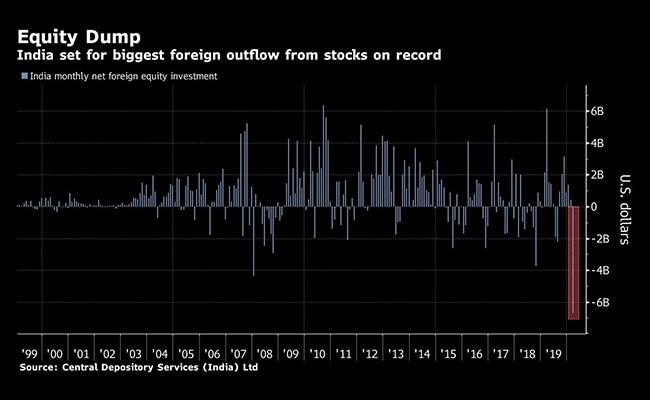 Oxford Economics slashed India’s January-April growth forecast to 3 per cenet, a number not seen even during the worst of the global financial crisis. The main equity gauge slumped by a record 13.2 per cent Monday and the rupee weakened past 76 a dollar for the first time ever. The benchmark 10-year sovereign bond plunged the most in almost four months.

“A part of the cerebral cortex that senses fear and survival seems to have activated in the minds of investors,” said Umesh Mehta, Mumbai-based head of research at Samco Securities Ltd. “The only relief in this market can come from either policy makers and regulators, or from some positive news that a cure for the pandemic is near.” 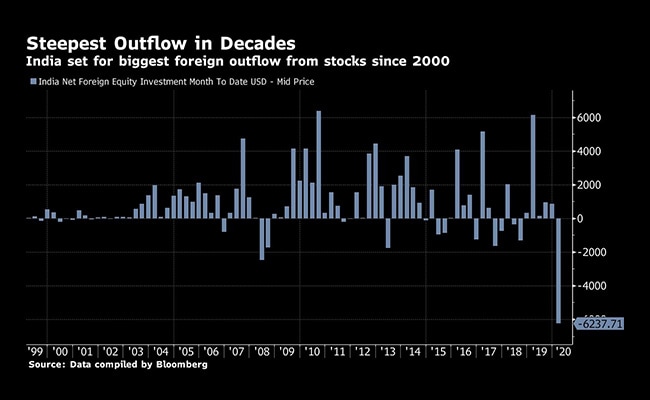 Bloomberg Economics estimates the government needs at least 1 per cent of gross domestic product — $30 billion — to meaningfully respond to the virus outbreak. Meanwhile, the nation’s billionaires are diverting their factories to manufacture medical equipment and pledging to keep paying their staff even as production grinds to a halt. The government allowed companies to use their philanthropy funds to prevent the spread of the coronavirus.

Reliance Industries Ltd., controlled by India’s richest man Mukesh Ambani, has helped equip a hospital in Mumbai dedicated to patients of Covid-19, the disease caused by the coronavirus. It will also build quarantine centers and produce 1,00,000 facemasks a day and other personal protective equipment for health workers. The group’s telecom unit will offer free broadband to enable work-from-home during the lockdown and will pay its lowest paid workers twice a month to protect household incomes.

Mr Ambani joins Mahindra & Mahindra Ltd. Chairman Anand Mahindra and Vedanta Resources Ltd. Chairman Anil Agarwal — a combined worth of more than $40 billion between the trio — who have so far made pledges.

Going by various reports from epidemiologists, it is highly likely that India is already in Stage 3 of transmission.
—Cases could rise exponentially with millions of casualties, putting a huge strain on medical infrastructure (1/5)

Policy makers are aware of the risks of such a move. India — with a record Rs 5.9 lakh crore of local corporate debt maturing this year — faces “waves of default” if cash flows aren’t maintained, the government’s principal economic adviser Sanjeev Sanyal said an interview.

Finance Minister Nirmala Sitharaman last week said the government will announce a relief package for coronavirus-affected sectors as soon as possible. The Reserve Bank of India, which is due to review interest rates April 3, announced a Rs 1 lakh crore cash injection on Monday.

“Let me assure, whatever it takes to keep the cash flow going in the economy will be done,” Mr Sanyal said. “We need to make sure that when we are past the health storm, we still have an economy that has not gotten gridlocked. Because unwinding that would be more difficult.”

‘How dare we not vote?’ Black voters organize after DC march