Kanpur district administration today used bulldozers to demolish a house belonging to Vikas Dubey, the main accused in the cold-blooded murder of eight UP cops last week and a notorious criminal mastermind charged in 60 criminal cases. The demolition was done in the presence of Uttar Pradesh police officers.

In visuals of the demolition, a group of armed police officers (some with what appear to be assault rifles) stand guard as a lone lack-and-yellow bulldozer breaks down the house.

Large piles of rubble and brick, and half-broken walls, can be seen in the video as the bulldozer goes about its job. Visuals also show empty rooms with the broken roofs and several cars, all white in colour, similarly destroyed.

Meanwhile, a Station House Officer (SHO) has been suspended.

“At the time of encounter, he fled the encounter site. Had he faced the criminals, situation could have been different,” Mohit Agarwal, Inspector General (Kanpur Range), was quoted by news agency ANI.

Vikas Dubey remains missing, over 36 hours after the bloodbath in Bikru village, which is around 150 km from state capital Lucknow.

More than 25 police teams have been formed to capture him. 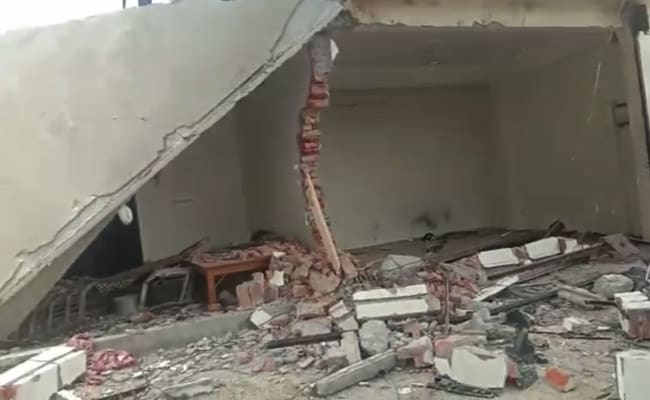 UP’s notorious criminal mastermind is believed to be politically-connected

The police have also said that a surveillance team is scanning more than 500 mobile phones in an effort to retrieve information pertaining to his current location.

A cash reward of Rs 50,000 has been offered for the same information, with the assurance that the identity of the tipster will be concealed in order to prevent revenge attacks.

Last week a large police force of around 50 cops, drawn from three police stations, had set out to arrest Vikas Dubey.

A raid had been planned at his village after he was named as an accused in a fresh attempt to murder case.

Aware of the impending raid, however, the gangster arranged for road blocks to slow down the cops who, when they did reach the village, were subject to an unexpected deadly crossfire.

Eight police personnel, including a Deputy Superintendent of Police, were shot dead, and seven others injured.

“The intention was to arrest him. There was an ambush. The firing by criminals was from three sides and it was totally planned,” Dinesh Kumar, Kanpur’s police chief, said.

Vikas Dubey’s criminal record began in 1990 with a case of murder. Over the years, he accumulated charges of attempted murder, kidnapping, extortion and rioting.

In 2001, Dubey was charged with the murder of Santosh Shukla, a Kanpur BJP leader who was chased and shot dead inside a police station. Dubey “surrendered” in 2002 but was acquitted.

A criminal with political links, he was also the member of a political party in the past and allegedly kept armed henchmen in his village.

Widely feared, he wields influence and a plaque in his village, at the site of a project, describes him as “Zila panchayat member”.

Opinion: What Exactly Will It Take For Rahul Gandhi To Allow A New Leader?