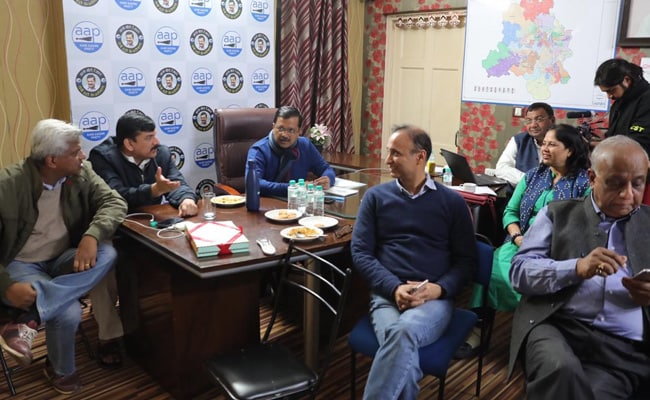 Delhi Election Results: AAP is leading with over 10k votes in 15 seats

AAP candidates were poised for victory with margins of over 10,000 votes in 15 constituencies, including Chandni Chowk and Tilak Nagar while BJP’s Jagdish Pradhan was the only candidate from the saffron party to lead by a margin of over 26,000 votes from the Mustafabad seat, the latest election trends showed.

Deputy Chief Minister Manish Sisodia was trailing by 859 votes from the Patparganj constituency while AAP’s Atishi was leading by a slender margin of six votes from the Kalkaji seat.

BJP’s Jagdish Pradhan was ahead of Aam Aadmi Party’s Haji Yunus by a margin of 26,656 votes from Mustafabad, which is a minority dominated constituency. Congress’s Ali Mehdi polled only 2,074 votes.

Incumbent AAP MLA Sanjeev Jha was ahead of his JD (U) rival Shailender Kumar by 18,285 votes from the Burari seat, which has a considerable Poorvanachali population.

In Chandni Chowk constituency, AAP’s Parlad Singh Sawhney was ahead of his BJP rival Suman Kumar Gupta by 17,668 votes. Sitting MLA Alka Lamba, who shifted loyalties to the Congress from the AAP, polled only 609 votes.

Deoli, which is a reserved seat, saw AAP’s sitting MLA Prakash Jarwal, surging towards victory with a margin of 10,679 votes. BJP’s Arvind Kumar was on the second spot.

AAP’s Surender Kumar was ahead of his BJP rival Ranjeet Singh by a comfortable margin of 14,740 votes from Gokalpur constituency, which is also a reserved seat.

Sitting MLA from Karol Bagh, Vishesh Ravi was ahead of BJP’s Yogender Chandoloya by a margin of 13,070 votes while AAP’s Kuldeep Kumar was leading his BJP rival Raj Kumar with a margin of 16,926 votes. Both Karol Bagh and Kondli are reserved seats.

Five-time MLA from Matia Mahal Shoaib Iqbal, who had joined AAP ahead of the assembly polls was leading by a margin of 12,973 votes while BJP’s Ravinder Gupta was in the second spot. Iqbal had earlier been with the Congress and the Janata Dal.

In Model Town constituency, AAP’s Akhilesh Pati Tripathi, was ahead of AAP rebel Kapil Mishra, who was fielded by the BJP, by a margin of 10,400 seats. Mishra was a minister in the AAP-led Delhi government but had rebelled against the party and later joined the saffron party.

AAP’s Raghav Chadha, who replaced sitting MLA Vijender Garg in Rajinder Nagar, was ahead of BJP’s Sardar RP Singh by a margin of 15,211 votes.

AAP’s sitting MLA and Delhi Jal Board chairman Dinesh Mohaniya was poised for victory from Sangam Vihar seat as he was ahead of his JD (U) rival Shiv Charan Lal Gupta with a margin of 18,793 votes.

Trilokpuri (reserved constituency), saw AAP’s Rohit Kumar, surging towards victory over his BJP rival Kiran with a margin of 20,618 votes.

In Sultanpur Majra (reserved), AAP’s Mukesh Kumar Ahlawat was leading against BJP’s Ram Chander Chawariya by a margin of 22,732 votes while in Tilak Nagar, AAP’s sitting MLA Jarnail Singh was ahead of BJP’s Rajiv Babbar by over 15,211 votes.

Asking Foreign Students To Return Will Encourage Schools To Open: US Official

UP Man Cycles 100 km To Marry, Then Rides Back Home With Bride