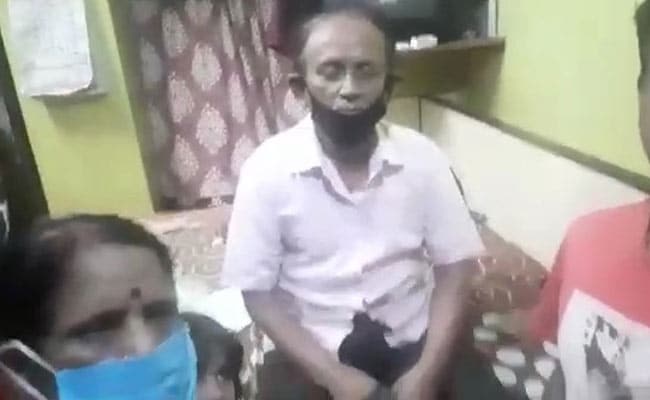 Om Prakash’s son used his cellphone to film his father leaving their house for hospital.

When Raj Gupta received a phone call from the nodal COVID-19 hospital in Kolkata to say an ambulance was on its way to collect his father, the iron merchant was stunned. Just 24 hours earlier, the same hospital had discharged his 68-year-old father, Om Prakash, declaring that he was not infected with coronavirus.

The phone call made the shocking revelation that the hospital had messed up – Om Prakash had in fact tested positive.

On Monday, Raj Gupta used his cellphone to film his father leaving their house for hospital for the second time. Om Prakash never returned. Within 12 hours of being readmitted to hospital, he died.

“How can a person who walked on his own die? This is negligence. My father has been murdered. We want answers from Bangur Hospitals and the highest officials at the Health Ministry on why this happened. We want them to come here and give us answers. Our family should be compensated,” he said.

The Health Department has ordered an inquiry into Om Prakash’s case. His frail wife, their son and daughter-in-law and two grandchildren will be tested for COVID-19 next week on May 3.

When Raj Gupta pointed out he was being given two diametrically opposite results, hospital officials curtly said they would not be ready to send him home if they weren’t sure that he was not infected.

With considerable difficulty in the stringent lockdown, Raj Gupta organised a vehicle, asking his cousin who lives outside Kolkata, at Sodepur, to go and pick up Om Prakash, and collected his father.

The next evening, the hospital called to say there had been a mistake and the ambulance was on its way to pick up Om Prakash.

Raj Gupta’s last interaction with his father is caught on his cellphone’s camera- the moment when he walked down the stairs and entered the ambulance. “Insult To Every Indian”: Rahul Gandhi Amid Row Over Cost Of Testing Kits