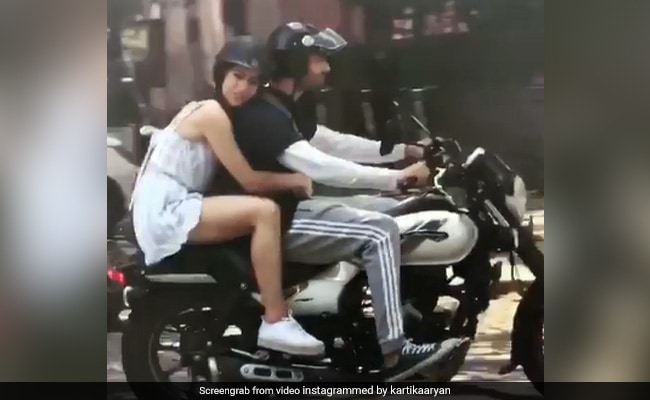 Kartik Aaryan and Sara Ali Khan in a still from the clip. (Image courtesy: kartikaaryan)

The latest video of Kartik Aaryan and Sara Ali Khan goofing around on a bike will definitely wipe-off your mid-week blues. Kartik and Sara, who await the release of their upcoming film Love Aaj Kal, once again found a spot on the trends’ list, courtesy Kartik’s latest Instagram post. The actor, on Tuesday night, shared a boomerang video of himself and Sara, in which both of them can be seen riding on a bike with their helmets on. However, it’s the caption that stole the spotlight on the Internet. Instagramming the clip, in which Sara can be seen dressed in a striped jumpsuit, Kartik wrote: “Challan katega” and hilariously teased Sara by adding: “Aur mera bhi….” ROFL. The actress was, however, quick to respond to the post. She dropped an angry emoticon in the comments section.

But Kartik sure knows how to handle Sara’s anger. He quickly clarified that it was just a joke and wrote: “Joke hai amma joke… Soja.” Here’s what Kartik Aaryan posted:

This isn’t the first time Kartik Aaryan has teased Sara Ali Khan on social media. On Monday, the actor posted a photograph of himself and the Kedarnath actress on Instagram and made a hilarious reference to her body transformation. Sharing the photo, in which Kartik could be seen feeding Sara with his hands, he wrote: “Kaafi dubli ho gayi ho. Aao pehle jaisi sehat banayein.” Sara, who was overweight, left everyone amazed after she went through a jaw-dropping body transformation before making her Bollywood debut.

How can we forget Kartik’s epic comment on the boomerang video that Sara Ali Khan shared last month? The clip featured Kartik, wearing a helmet, sitting on a bike with Sara holding onto him. However, the actress could be seen riding with Kartik without a helmet on in the video.