One of the striking features of the anti-Sikh pogrom of 1984 was how quickly rumours spread across the city about Sikhs poisoning Delhi’s water supply and trainloads of bodies of massacred Hindus arriving from Punjab. Remember, those were pre-WhatsApp days and rumours had to physically pass from one ear to another. So how did these rumours engulf Delhi within 24 hours of Indira Gandhi’s assassination? It happened with a little help from the Delhi Police. A citizen’s fact-finding report of that time tells us that they “came across evidence of policemen in vans touring certain localities and announcing through loudspeakers the arrival of the train and the poisoning of water. In certain areas…police officials had rung up residents advising them not to drink water.”

This is just one example of the egregious collusion between the police and organised mobs. Eyewitnesses tell us how the police were either missing, stood around as spectators, or actively participated in the killing of Sikhs. In Trilokpuri, one of the epicentres of the 1984 riots, policemen allegedly escorted the mobs, and even emptied out their fuel tanks to hand over diesel that would be used to burn people, homes and shops. The SHO was accused of withdrawing the “constables who were on duty there when Sikh girls were being raped.” In Sultanpuri, the SHO allegedly killed two Sikhs himself.

In most places, cops refused to register FIRs. Hindus who escorted their Sikh neighbours to file complaints in the local thana were told to fight for their co-religionists, not waste their time on protecting Sikhs. Peace marches were stopped  while arsonists were given free rein. Cops who wanted to stop the riots found their seniors uncooperative. 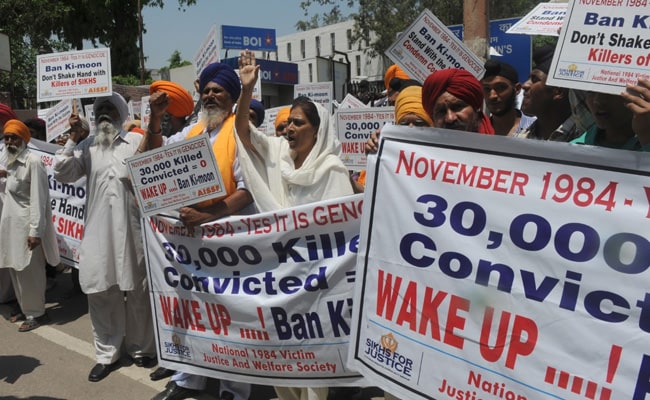 Relatives of Sikh victims who were killed in the 1984 riots shout anti-government slogans during a protest (April 27, 2012)

It would be willful naivete, however, to pretend that the cops were acting on their own. Victims, eyewitnesses, journalists, citizen’s groups, all agree that the pogrom was organised and executed by Congress party netas and workers. Goons had been brought from neighbouring villages and ‘resettlement colonies’ on two-wheeler cavalcades, tempo-vans, trucks. DTC buses had been seconded to help the rioters move from place to place. Local Congress party workers marked homes with crosses to identify Sikh families. Policemen then duly led the mob to their doorstep and stepped back for them to unleash their dance of death.

People who worked with Sikh widows to help them cope with their grief recount their bewilderment. The historian Uma Chakravarti wrote about how these women found it difficult to accept that their own neighbours saw them as traitors. The conflagration was so sudden that its victims took years to come to terms with its reality. Almost overnight, they lost faith in the state and the Congress party, which they saw as an extension of the state.

This is why comparisons between the recent riots in North-East Delhi and the anti-Sikh pogrom of 1984 are misleading despite a superficial resemblance. In both cases, the police have either been absent, inactive or complicit. We know that in this week’s riots, there was a degree of planning in identifying homes, shops and even cars owned by Muslims. But that is where the comparison ends. Unlike the overwhelming evidence of the role of Congress leaders in 1984, reporters I spoke to told me that BJP leaders were themselves taken by surprise at the speed with which the fire spread this time. It is worth recalling that on Sunday, Delhi BJP chief Manoj Tiwari had blamed Kapil Mishra’s hate speech for the party’s defeat in the recent state elections. Tiwari had asked for Mishra to be removed.

A few hours later, Mishra held a rally with his supporters, threatening to take to the streets if the Delhi Police didn’t clear the anti-CAA protestors in Jaffrabad in North-East Delhi. Mishra was flexing his political muscle to ensure Tiwari couldn’t get him ousted. Clashes began within a few hours of Mishra’s speech, and full-blown riots erupted the very next day.

The divisions with the BJP was not restricted to Tiwari and Mishra. Gautam Gambhir, former India cricket captain and BJP MP from Delhi, said Mishra’s speech was “unacceptable” and asked for “strict action” to be taken. BJP’s state vice-president Shyam Jaju, however, backed Mishra, saying that his speech was a call for peace. The division within the BJP can also be seen in how the party’s Twitter army is divided over whether to back Gambhir or Mishra.

Even on the ground, reporters say, local level BJP leaders were divided over the mob-violence. While, some appear to be backing it, others were seen actively protecting Muslim families. Unlike, 1984, where the foot-soldiers were marshalled by Congress leaders, the recent riots have been organised ‘from below’. The young men who have been turned into arsonists through the collective psychology of the mob, have all grown up on a diet of anti-Muslim rhetoric. They might have voted for different parties in the recent elections, but they are all united by the ideology of political Hindutva. After all, Kapil Mishra himself was in AAP just a couple of years ago.

It also explains why Arvind Kejriwal has taken such a lukewarm stand on the riots. In a situation, where the popular mood is difficult to gauge or control, the political class is unlikely to commit to anything concrete. This is also why the Delhi Police has been ambivalent in its approach towards the rioters. There was no way for an average cop on the street, or his boss, to know whether the rioters have political sanction and protection. In such a situation, acting tough could end up in a transfer or suspension.

The Delhi riots are also different from the 1984 pogrom because it is a culmination of long-standing, simmering hatred. Communal distrust has been sown by years of political propaganda, disinformation and incendiary prime-time TV shows. No one is surprised that the people of these densely-populated neighbourhoods of Delhi, where different religious communities live cheek-by-jowl, can suddenly want their neighbour’s blood.

There is one way in which 2020 is a continuation of 1984. In the aftermath of the pogrom, as Sikh families tried to put together broken pieces of their lives, they lost faith in the state, in the polity and in the justice system. On the other side, Hindus began to believe that the various arms of the state are on their side. Those who questioned the state’s actions began to be seen as being anti-Hindu, and when the state acted against a community, it was seen as an action to protect Hindus.

This sentiment has amplified over the past few years. This is why Hindu mobs boast, on camera, that the police are on their side, and right-wing handles on social media tell Muslims to prepare to die because there are shoot-at-sight orders in place. It is tempting for politicians – even those in the opposition – to not be seen on the wrong side of popular prejudice. The cost of such pusillanimous politics will have to be borne by generations to come.