India Inc.’s earnings remain weak amid a slowing economy, but some analysts found at least some signs of hope in the most recent batch of quarterly reports.

While sales for non-financial companies in the NSE Nifty 50 Index were down 2.1 per cent year-on-year in October-December, the pace of the decline in consensus estimates has slowed down, according to Antique Stock Broking Ltd.

During the latest results season, analysts lowered their Nifty earnings forecasts by 2.8 per cent for the fiscal year ending March 31 and 3.9 per cent for the following year, compared with downgrades of 10.5 per cent and 7.4 per cent in the previous reporting period, analysts led by Dhirendra Tiwari wrote in a note. 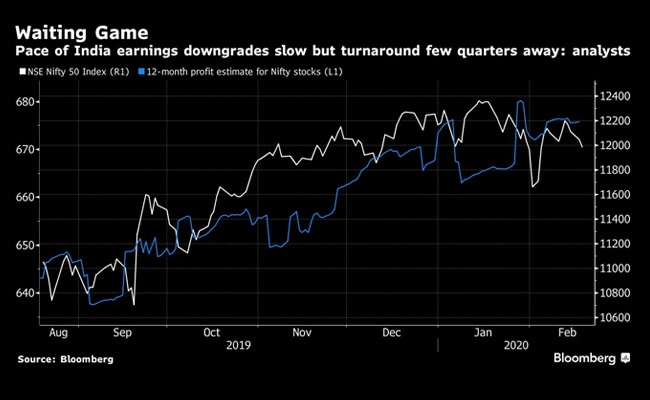 Of the 49 Nifty 50 companies that have reported so far for the latest quarter, 24 missed analyst estimates, 21 met or exceeded and four were incomparable, data compiled by Bloomberg show.

With the economy set to grow at its slowest pace in 11 years, demand for goods and services has suffered. Still, Antique expects earnings to recover from the second half of the next fiscal year.

“Various high-frequency indicators point toward bottoming out of the current demand slump,” Mr Tiwari said. The brokerage is betting on a strong output of winter-sown “rabi” crops to spur rural India’s economy while the corporate tax cut and easy monetary policy support an overall recovery.

Nifty earnings estimates for the current year have come down 4 per cent year to date, Citigroup analysts led by Surendra Goyal wrote in a report. Given that the consensus is still calling for profit growth of about 33 per cent versus the previous year, there may still be more room for downgrades, Citi cautioned.

The fiscal third-quarter commentary from companies, though less negative than previously, were still largely “tentative,” Dolat Capital Market said in a note.

“There were pointers that suggested toward some green shoots but too early to call for a decisive turnaround,” Dolat analysts wrote.

If Vodafone Idea Disconnects, India Picks Up The Bill

18 People, Including Both Pilots, Dead In Plane Tragedy In Kerala