The video went viral as the students posted it on WhatsApp, say officials (Representational photo)

Three students from Kashmir studying at a private engineering college in Hubballi district of Karnataka were arrested on sedition charges for allegedly raising pro-Pakistan slogans and posting a video of it on a messaging platform, police said on Saturday.

Police said, according to preliminary information, the students are from Shopian in Kashmir and action has been taken on the basis of a complaint from the college management.

“We received information that three students hailing from Kashmir studying at the KLE Institute of Technology had raised slogans supporting Pakistan. They had made a video about it which has gone viral. Immediately our team headed by Inspector Gokul Road station went to the spot and arrested them,” Hubli-Dharwad Police Commissioner R Dileep said.

Right wing activists, including those from Bajarang Dal who had gathered near the college, demanded stringent action against the three.

As the students were being taken to the police station with their faces covered, an activist tried to attack them, but police escorted them safely.

The FIR has been lodged under IPC sections relating to sedition and affecting communal harmony, the official said.

“We are investigating, and whatever comes out as per evidence, law and facts, we will take further action. We will look into their background, whether anyone has tried to mislead them,” Mr Dileep said, adding that the arrest should not be seen as action against any particular community or region.

According to officials, the selfie video of the three has gone viral as they posted it on WhatsApp. In the video one of them can be purportedly seen initially uttering something with background music on, after which they chant ”Azadi” one after the other. Then joining chorus to the music that is playing, they purportedly say “Pakistan Zindabad.”

The music they played is said to be Pakistani military’s media wing, the Inter-Services Public Relations (ISPR) song, which police said needs to be ascertained.

The students were admitted under central quota and two are doing their first year civil engineering, while the other is a third year student in the same stream, he said.

According to him, the three had made the video and posted it on WhatsApp.

“It came to our notice in the morning, following which I called the students immediately to my office, and informed the police,” the principal told reporters.

“In the video, they have purportedly shouted pro-Pakistan slogans allegedly in the backdrop of the Pulwama attack anniversary yesterday,” he added.

Union minister Pralhad Joshi, who hails from the district, described the act unfortunate and demanded strict action against those involved. 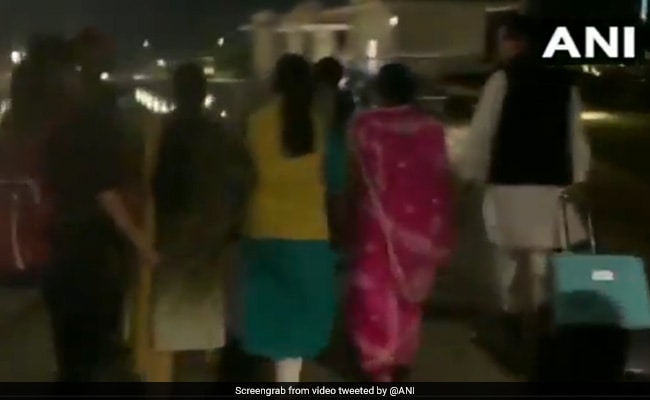 Tamil Nadu Has Most Coronavirus Cases After Maharashtra